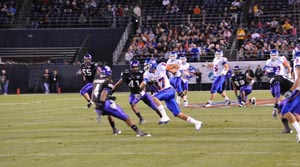 San Diego’s two post-season college football games combined to produce an economic impact of $52.3 million for the San Diego region in 2008. This figure was the result of a study conducted by the San Diego State University Center for Hospitality and Tourism Research. The games are organized by the San Diego Bowl Game Association.

The 31st annual Pacific Life Holiday Bowl, which was played December 30 and featured the Oregon Ducks and Oklahoma State Cowboys, generated $34.7 million in economic impact. Direct visitor spending totaled $18.0 million, while $16.7 million was derived from indirect spending. The study revealed that 36,052 fans traveled from outside the County of San Diego to attend the game. Total attendance at the Qualcomm Stadium event was 59,102.

The 4th annual San Diego County Credit Union Poinsettia Bowl, which was played December 23 and featured the TCU Horned Frogs and Boise State Broncos, generated an economic impact of $17.6 million. Direct visitor spending totaled $9.1 million, while $8.5 million was derived from indirect spending. According to the study, 18,699 fans traveled from outside the County of San Diego to attend the game. Total attendance was 34,626.

“To know that all of our hard work and efforts are exponentially realized in economic benefit for the San Diego region is just a great feeling,” said 2008 President Larry Baber. “The impact on San Diego is tremendous, and the effects ripple far beyond the fans and players, to the citizens of San Diego. In the slowest time of the year for the local tourism industry, these games really bring life into the city.”

The mission of the non-profit San Diego Bowl Game Association is to generate tourism, exposure, economic benefit and civic pride for San Diego and its citizens by presenting the nation’s most exciting and entertaining bowl games and festivals of events.

Since its inception in 1978, the San Diego Bowl Game Association has created an impact of $532.8 million.